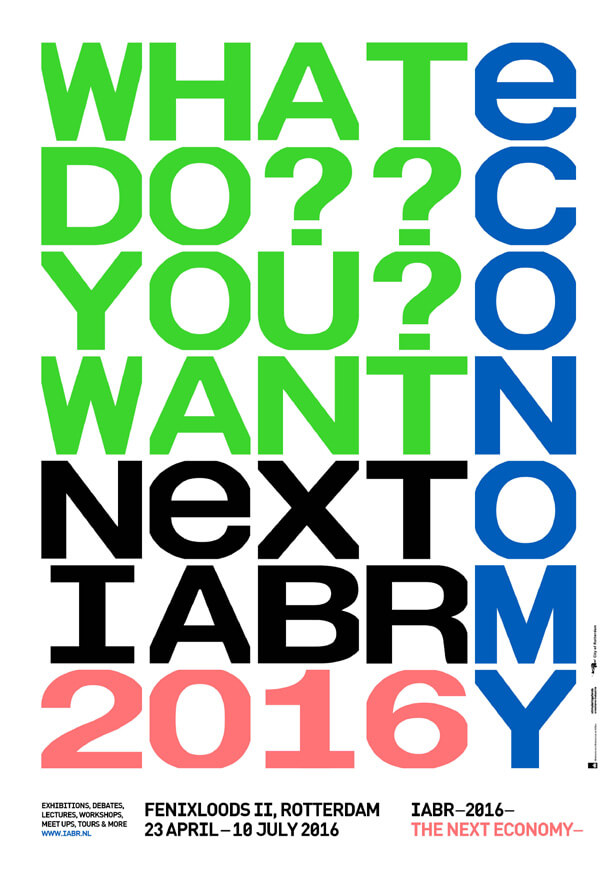 In half a century, twice as many people will live in cities as do now. The city will then truly be the motor of the global economy. What does this urban Next Economy have in store for us?
No one can predict what the future will hold, but one thing is certain: more of the same is no longer a viable option. Climate change, global urbanization, emerging new technologies, increasing migration, and growing inequality urgently demand real solutions. We have to rethink the way in which we live, work, and learn, and where and how we consume and produce. We will have to redesign the balance between system and individual, between rich and poor, between young and old, between sustainability and growth.

How should we design and govern our cities? Although we are not prophets, we can investigate and imagine tomorrow’s city, research it by design. IABR–2016–THE NEXT ECONOMY takes the main challenges of the twenty-first century as its starting point. We explore the Next Economy and imagine the city of the future: the healthy and socially inclusive city, the productive city, and the sustainable green city. The city in which public space once again takes center stage.

IABR–2016 shows us what we can want. The results of our own explorations, carried out in the IABR–Ateliers. And projects from all over the world that present different combinations of living and working, new production chains and a smarter balance between the formal and the informal city, where ‘smart’ technology is put to use to achieve a socially inclusive society. Together they offer an abundance of possible futures: from radical scenarios for an energy transition to examples of an experimental, cooperative local development strategy, and from megaprojects on the North Sea and in Africa to neighborhood initiatives in South America, China, and Rotterdam.